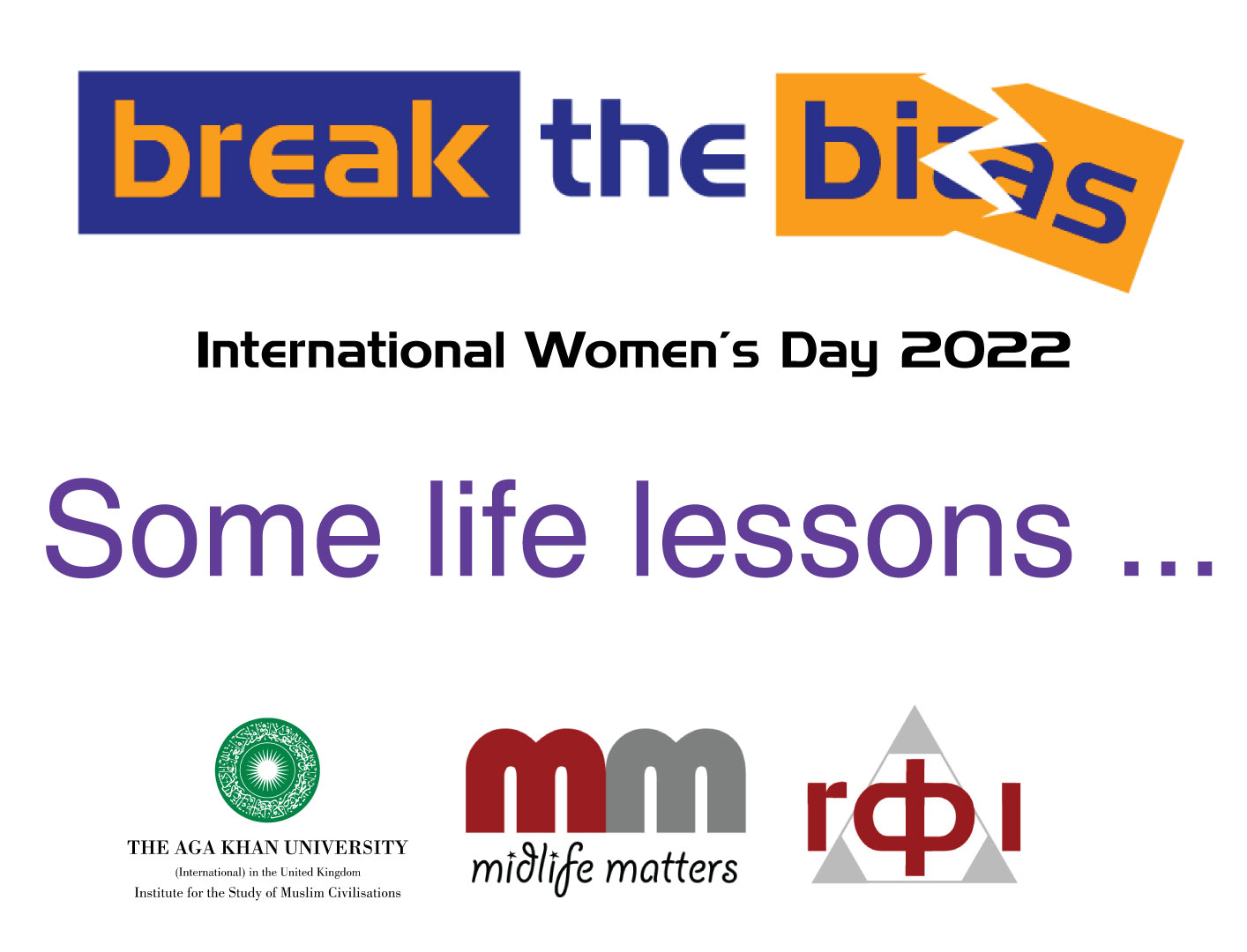 We were delighted to work with the Aga Khan University to bring you a truly global panel of amazing women from around the world who shared their insight and strategies to empower all women to rise, succeed, achieve and break the bias

Our distinguished international panel was made up of (click the name to go to their presentation):

Member of the UK House of Lords

Baroness Uddin (@BaronessUddin) is a pioneer of community work, determined to empower women's inclusion in public life. In recognition of her contribution to advancing social equality and disability rights, Her Majesty the Queen appointed her the first Muslim woman elevated as a Member of the House of Lords, British Parliament.

She is a Former advisor to British Prime Ministers on Community Cohesion, Preventing Radicalisation and on Increasing Women's participation in national politics and Civil Society, as well as a member of many Government Committees and other appointments.

As a mother of a son who lives with Autism and learning disability, she is a devoted champion of disability rights and served as a Board member of Autism Speak. She is a Trustee and chair of the National Commission of Muslim Women, supporting its campaign Change the Script.

Member of the UK Parliament

Caroline is a Member of the UK Parliament and is passionate about the family as she believes strong families lead to strong societies. She greatly values the education system we have in the UK above almost everything else. Prior to becoming an MP, Caroline was a teacher for 15 years and trained for headship in 2008. She recently returned to teaching on Fridays for the first half term of the year to support Eastbourne schools during the pandemic. She believes education transforms lives and it was the driving force behind her standing for Parliament.

Member of the UK Parliament

Sally-Ann Hart has been a Member of the UK Parliament since 2019 and, prior to her election, was a local Magistrate and a District Councillor. She initially started her career as a Lawyer, specialising in corporate finance in the City of London, but it was during her time as a Magistrate and Councillor that Sally-Ann realised her determination to become a Member of Parliament to help improve the lives of those in Hastings and Rye who need it most.

Anjum Halai brings long standing experience in higher education in low- and middle-income countries. She obtained her Doctoral degree from Oxford University, UK. She was an Adjunct Professor at the University of Alberta Canada (2011-2016) and a research Fellow at the Centre for International Education and Development Sussex University UK. Her research interests are in social justice issues in education. She has published widely in the area of gender and education. She led the Task Force set up by the Provost to develop policy on awareness and prevention of gender-based harassment. She is a member of Advisory Committee on Women's Leadership Academy at AKU. Nationally, she is a member of the Women's Leadership Group in Pakistan, set up by Higher Education Commission. This group has designed a course for Women's Leadership Program for mid-career women in Higher Education in the country.

Born in Asia, raised in Africa and educated in Europe, Amina comes from a very diverse and multicultural background. Her mission is to bring about a paradigm shift in healthcare by promoting better access to health-tech across the globe. She obtained a Doctor of Public Health Degree at the London School of Hygiene and Tropical Medicine and later moved back to Japan to assist the World Dementia Council in association with the Health and Global Policy Institute. She specialises in health policy, pharmaceutical affairs laws and healthtech startup support. In 2019, she launched Fermata, Inc., which has become a leading FemTech ecosystem in Japan and Asia.

Sevgi Adak is a faculty member at Aga Khan University's Institute for the Study of Muslim Civilisations in London. Prior to joining AKU-ISMC, she was a research fellow at the International Institute for Social History, Amsterdam. Specializing in gender studies, history of modern Turkey and Turkish politics, she has published on the history of women's movements, contemporary feminisms, secularism and state-society relations in Turkey. She is on the editorial board for the Contemporary Turkey book series jointly published by the British Institute at Ankara and IB Tauris. Her book Anti-Veiling Campaigns in Turkey: State, Society and Gender in the Early Republic (IB Tauris, 2022) has just come out.

Consultant and Specialist in Obstetrics and Gynaecology, India

Dr Hema Divakar is a leading medical professional of India with a vision to improve the healthcare services ecosystem for the welfare of women. Over the last three decades, she has been a game changer in healthcare, establishing new benchmarks, standards and touching women's lives in the process. She has received numerous awards and, amongst other things, advises the Ministry of Maternal Health and Family Welfare and is active in the India with initiatives from the international Federation of Gynecology and Obstetrics.She is an accomplished specialist in the field of Obgyn care and is the Medical Director at the Divakars Specialty hospital in Bangalore, a centre of excellence for women's healthcare and centre for Skill Enhancement.

Following her Graduation in Hotel Management from Institute of Hotel Management, Mumbai (where there was only a handful of women in her year), Ashrafi started her career with the Taj in the early 1980s. Through her hard work and diligence, she was made Director Food and Beverage Manager at The Taj Mahal Palace and Towers. During these years her aim was not only to hone her own talents, but to develop and recognize the potential of the managers who worked with her. She had the opportunity to look after Heads of State like John Major, Margaret Thatcher, George W Bush and François Mitterrand. In the midst of her career at the Taj she was sent to Les Roches, Switzerland by the Taj and earned her Masters in Hospitality, majoring in Finance.

She was the first female General Manager at the Taj Lake Palace (Udaipur) and at the Taj Wellington Mews Residences (Mumbai). She joined a select band of women Managers to break the glass ceiling when she was given the opportunity to head the San Francisco, Taj Campton Place hotel. Under her leadership there, the hotel's restaurant was awarded two Michelin stars and the hotel was also on the Forbes Four star list and the Travel and Leisure list of World's Best Hotels. This also presented her with the opportunity to showcase and develop the Taj Hospitality in an international landscape.

Ashrafi is often described as someone who is on a quest for creative thinking and is known to have gone the extra mile to please guests with out-of-the-box innovative ideas. She is also a marathon runner and a fitness enthusiast.

Experienced marketing lead with 12 years experience in Brand Building, Marketing Management, Media and Communications in the FMCG and healthcare industries within Unilever, Energizer Holdings and Essity. Yosra gained her Bachelors Degree from the German University in Cairo, focused on General Management, Marketing and Economics

Katie is a leading voice on the menopause and works in the private and public sectors to deliver programmes to empower women and educate people around midlife. She is an Associate of the British Menopause Society and collaborates closely with two Professors of Gynaecology. She also runs leadership development programmes for women, as well as communications, team development and building resilience courses. Katie has worked in Diversity and Inclusion for 30 years and has written two books on women in business. She regularly appears as a key-note speaker at global conferences, in the media and gave a TEDx talk in 2019 on 'The roar of the menopause'

Member of the UK House of Lords