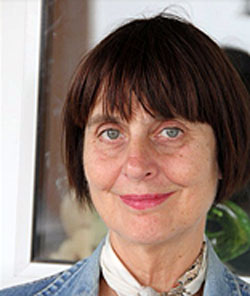 Su Warren is a woman fast approaching her 70th year. She was born in London to working-class parents. She married young amd had three children, ended up with a failed relationship and bought her three children up on her own.

Her work has involved many different occupations including waitressing, driving, office work etc. Su did a two year diploma course in Social work & became a community worker, she worked with pensioners, teenage mothers and as an advice worker at a play association. Su then ran her own business selling vintage clothes. She then decided to leave London and head for the country and got a job on a llama farm.

Su now lives by the sea which has always been her dream. Retirement isn't something on Su's agenda, she has done some cat walk modelling and she sit for artists too. She has also made a film 'Extraordinary Times' which is a positive view on ageing. This was inspired by her wonderful neighbour Rita who sadly died before Chritmas, just short of reaching her 100th birthday in March. The women in the film are all amazing and Su feels very honoured to be able to tell their story. She didn't think she would be making a film at this stage of my life, but as Su says, everything is possible, no matter what your age.

Su lives by the phrase, "Life is a roller coaster ride, treasure every moment of it". Joie de Vivre is one of her favourite quotes and that's her philosophy of life. Treasure it. No matter what.